Reduces the heat generation of mobile terminals, which is increasing proportionally with higher functionality 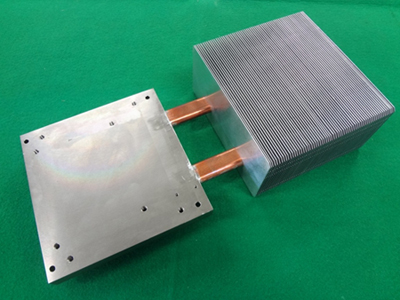 The higher functionality of mobile terminals like smartphones and tablets advances with each model change and the heat that their CPUs and graphics chips emit is also increasing. Because of that, methods are required to process the heat generated properly while at the same time meeting demands for thinner and lighter products. A product that is effective as a countermeasure for such heat is the vapor chamber, which we succeeded in newly developing, one of the thin heat pipes that Furukawa Electric specializes in.

Heat pipes are heat dissipating products that have a simple structure with a working fluid vacuum sealed in copper tubing. They transfer heat by making the operating fluid circulate by convection depending on the difference in temperature between both ends of the pipe. Heat pipes are used in applications that dissipate heat by connecting a heat source like a CPU and cooling fins via heat pipes to force the transfer of heat between them, or applications that uniformly distribute heat by spreading out a hot spot (a particular high temperature point) through a heat pipe, in order to reduce the temperature of the spot to a level where a person can touch it. Because they run without using electricity, they have been adopted for various electronic devices like PCs and game machines.

This heat pipe uses the capillary phenomenon. The term “capillary phenomenon” refers to a liquid rising and falling within a tube due to the action between the adhesive power of the liquid on the inner surface of the tube and its surface tension. Plants are able to suck water up from their roots and tissue paper is able to absorb water using this phenomenon. Furukawa Electric used the small diameter heat pipe manufacturing technology for electronic products that it has cultivated over many years to realize a capillary structure by sintering metal powder inside copper tubes. Using the strong absorptive power of sintered metal, it is possible to transfer water from a low place to a high one.

A heat pipe using this sintered metal is characterized by the ability to dissipate or uniformly distribute heat irrespective of the angle of the product. Because the heat generating source may be positioned at a lower point than the cooling part if a product is used at a tilted angle, the working fluid will have to be supplied to the heat generating source against gravity. This ability was lacking in the conventional structure with striations cut into the inside of the copper tubing, but by being able to realize a sintered metal powder structure, mounting on smartphones and tablets, which are used in various directions, became possible.

We commercialized heat pipes by flattening them, but there are limits to increasing thinness if a heat pipe is mounted on a thin mobile terminal because you need to flatten round tubing with a complex internal structure. On the other hand, greater thinness is demanded by users so what we advanced development of in order to respond to this need was the ultra-thin vapor chamber. The vapor chamber is a so-called plane-type and plate-type heat pipe with a special structure that causes a capillary phenomenon to occur prepared between two metal plates which are then stuck together. It is possible to make this at a thickness of less than 0.5 mm with a large surface area so it is able to display extremely high capabilities in applications for uniformly distributing the heat of smartphones. Because of this, it is expected to be an important and essential module for mobile terminals from now on.

Yoshikatsu Inagaki, Manager of the Development Section of Furukawa Electric’s Thermal Management Solution & Products Division Sales and Engineering Department, talked as follows about the main points during the development of the vapor chamber, an ultra-thin heat pipe and its future deployment.
“The required thickness was less than 0.5 mm, equal to or less than the lead of a mechanical pencil. Being able to make precisely a capillary structure that transfers heat, and maintain that structure even in a state of vacuum were the main points of development. I thought about and simulated the structure along with the members of Development Section, and we repeated the work process of building and evaluating prototypes step by step. We came up with a good idea when reading related literature widely while continuing to evaluate the prototypes and were able to reach our aim of meeting the performance demanded by customers and increase the product’s long-term reliability remarkably by introducing the idea. What I really felt at that time was relief rather than happiness. This vapor chamber will go into the mass production stage from now on and it will be used by more customers. I would like to cultivate it into a part that is said to be indispensable to mobile terminals.”