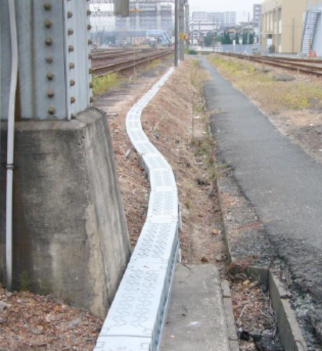 Cable troughs are gutter-like openable protective conduits for housing various kinds of cables used in electrical power transmission or telecommunications. They are mainly laid alongside railway lines and so on. Concrete cable troughs were mainstream until now, but they are very heavy and a big burden to transport and install. There are also issues with their durability as they tend to crack easily and are eroded by salt damage, snow melting agents, etc., so improvements are required.

Furukawa Electric has developed a new world-leading cable trough that can resolve these problems. Made of recycled resin that uses waste plastic as its main raw material, our Green Troughs demonstrate outstanding environmental performance. They are lightweight, only about a quarter of the weight of concrete troughs. Able to withstand large loads and impacts, they are less of a burden for workers to carry and install and significantly shorten work periods.

With their excellent weather resistance and corrosion resistance, they do not deteriorate easily by rain or snow and have a long service life. At the same time, they are easy to modify and can be cut with a circular saw, handsaw, and so on. They already have a track record of wide use in railroads, highways, photovoltaic power plants, large factories, and more.

In 2015, our Green Troughs were fully adopted for the CP5 (2014-2019) railroad infrastructure enhancement project underway in the UK, the birthplace of the railroad. As of the end of September 2015, approximately 100km of Green Trough had been shipped. Going forward, the UK’s cable trough market, which includes the HS2 high-speed rail line project, is expected to expand by a further several hundred kilometers.

Furukawa Electric’s AT Functional Plastics Division manager reflected on this latest order. “To get Green Trough accepted, we proposed a test operation rather than just submitting product data. We then installed a section for a long time somewhere unrelated to railways, and conducted test operations in a ditch alongside a railway track impacted by vibrations from the passage of rail vehicles. Through a series of stages, we earned the clients’ trust by bringing in the actual product for them to see until we succeeded in getting Green Trough adopted. Now, railway companies seem to recommend the lighter and more workable Green Trough, with worker safety in mind too, rather than concrete troughs.”

With similar infrastructure enhancement projects going ahead all over the world, demand for Green Trough with its excellent workability, durability and environmental performance is expected to rise in future in various countries worldwide. At Furukawa Electric, our policy is to respond flexibly to the behavior of this market. We will continue to improve and develop Green Trough to cope with installation in high, narrow or winding locations where concrete cable troughs cannot be built.