Collect and use delicate cells—with no damage 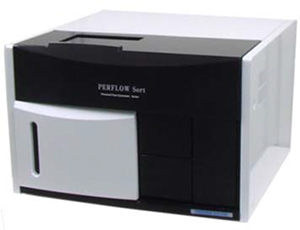 In fields that handles living cells (particularly iPS cells, ES cells, and stem cells that are necessary for differentiation and induction), it is extremely important to use good quality living cells—especially when forming colonies(note1), where "single living cells of good quality" are important. However, traditional cell sorters that use ultrasonic waves, high electric charges, and high hydraulic pressure apply a great deal of physical damage (stress) to cells when sorting(note2) delicate cells such as iPS/ES cells or nerve cells. This poses a significant issue, as most living cells are therefore unable to form colonies and eventually die.

Collect and use delicate cells—with no damage

"PERFLOW Sort" uses neither ultrasonic waves nor high electric charges. Solution is sent with a hydraulic pressure of less than 1/10 that of conventional systems and solutions that include cells are not dropped at high speed, preventing living cells splashing at high impact. This drastically reduces the major factor behind physical damage during the cell division process. This also results in much higher survival rates and successful colony formation rates, even when sorting mature megakaryocytoid cells(note3), human iPS cells, and other extremely delicate cells. In addition to increasing the precision of cell size analysis, Furukawa Electric's proprietary analysis method based on transmitted light information shows great promise in identifying cell properties—without relying on fluorescent light signals based on antigen-antibody reactions. 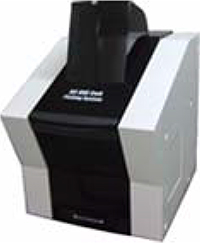 "Single Cell Picking System" is the first device in the world capable of measuring single living cells with exceptional sensitivity and time lapse(note5) on microchips composed of 80,000 to 330,000 or more microwells, as it collects target cells in a cultivation plate—without damage. Compared with conventional products that measure and collect cell clusters, Single Cell Picking System offers improved measurement sensitivity (to several hundreds of thousand times), and can collect single living cells that are a mere several micrometers small at an extremely high success rate of around 90%. It shows great promise in dramatically increasing the rate of successful drug development screening (which is said to have a current success rate of 3 in 10,000), and as a development tool for antibody drugs and the like.

Xu Jie, Bio-Device Business Team Director, Production Technology & Engineering Department, Production Technology Division—which formed the current business based on concept laid in 2004—had the following to say.
"Many products compete on cost-effectiveness in a direct attempt to satisfy customers. However, in developing bio-devices that target living cells, we need to be willing to decide on a development concept that best benefits the living cell—even if this means putting the convenience of the customer aside temporarily. This is because cells are living things with 'many emotions,' and if they are damaged they enter into apoptosis(note6), which is a kind of cell death. In order to properly multiply and differentiate living cells, we must always treat these cells as our number one 'customers.' We will continue to create new global businesses with a heightened sense of purpose that combine life sciences with engineering technology, as we challenge ourselves to bring our open innovation ever one step higher."

(note 5)Measuring/observing conditions as they change over time.

(note 6)A mechanism in the cells of multicellular organisms that actively induces death in unneeded/damaged cells, in order to keep the specimen in better condition.