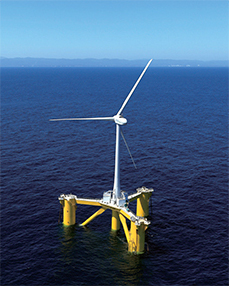 Wind power generation is known as a clean energy source that does not require fuel. However, there are not many suitable places in Japan for wind power where wind blows stably throughout the year so wind power generation offshore where the wind blows strongly and stably is attracting more attention than its counterpart on land. While offshore wind power generation development projects are advancing in various areas nationwide, one project that is emanating particular uniqueness is the Floating Offshore Wind Farm Demonstration Project, which the consortium(note 1) was entrusted at offshore of Fukushima Prefecture, sponsored by the Ministry of Economy, Trade and Industry.

Normal offshore wind power generation uses an implantation method that fixes the power generating equipment to the sea floor. However, the depth of the sea in the suitable areas off Fukushima is too deep for development using the implantation method to be realistic. Consequently, for the first time in the world, a floating method was adopted, allowing the windmills and substation equipment to float on the sea and connecting them with cables in the sea. Ten companies and one university took part in this project without precedents. Furukawa Electric was responsible for the development, manufacture and attachment work of the submarine cables that send the electricity generated to land and the floating submarine cables (“riser cables” below).

There was a significant point that had to be considered in the development of the riser cable. That was countermeasures against waves and tidal currents. The riser cables that connect the windmills and substation equipment and the riser cables that join the submarine cables from the substation equipment and land respectively move repeatedly as a consequence of waves and tidal currents. Because of this, there were concerns about cable breakages due to metal fatigue. As a result, the durability of the cables is important and because the targeted durable life of the windmills is 20 years, a targeted durability of 20 years was similarly also required for the riser cables too.

In response to this kind of high level requirement, Furukawa Electric used the knowhow it has cultivated in the development of submarine cables over more than 100 years and the development of riser cables over more than 40 years. We developed a riser cable possessing a structure with excellent water shielding performance and fatigue resistance characteristics. Sea water will not penetrate the inside of these cables even in long term use.

In addition, we attached buoys in between the windmills, substation equipment and submarine cables and installed the riser cables so that they draw an S-shape in the sea. By enabling them to move following the waves and tidal currents by giving them appropriate slackness, we were able to suppress metal fatigue to a minute level.

Shigeru Fujii, General Manager of the Electric Power Engineering Department of Furukawa Electric’s Power Cable Division, and Manager of the Oceanic Wind Power Project Team, talked as follows about the actual cable laying work.
“Fukushima is on the Pacific Ocean side of Japan so if a typhoon occurs there is nothing to block it and the sea gets very rough. Cable installation work is not something that you can advance a day at a time. If good oceanographic conditions do not continue for several days consecutively, you cannot implement the work. There was no end to the daily struggles, things like having no choice but to withdraw to port for several days because of an approaching typhoon. On the other hand, we were able to taste the real pleasure on this project of achieving great results together with other companies in various fields. I would like to contribute from now on too to the diffusion of floating-type offshore wind power generation.”

Furukawa Electric advanced this project with certainty, even while bothered by hardships due to this kind of weather. The Floating Offshore Wind Farm Demonstration Project started operating its windmills in 2013. Currently, after more than 2 years have passed, no trouble related to power transmission or communications has been reported.

The demonstration project is currently ongoing even now and the prospect of commercialization of floating offshore wind power generation is still a way off. The dawning of commercial operation promises the creation of a lot of employment and big economic effects, and contributions to the recovery of Fukushima. Furukawa Electric will continue to exert the utmost efforts as a constituent company of the project, and the company’s policy will be to aim for the top share of the domestic market and the acquisition of projects overseas.