Throughout Japan, cables are being buried underground to help prevent disasters and to realize more attractive scenery. In the past, utility poles have primarily been removed (underground cable installation) along major roads, but with the upcoming 2020 Tokyo Olympic and Paralympic Games, the target has been expanded to sidewalks. Given the limited space under city sidewalks in which cables can be buried and the high construction costs, however, underground cable installation has stagnated. 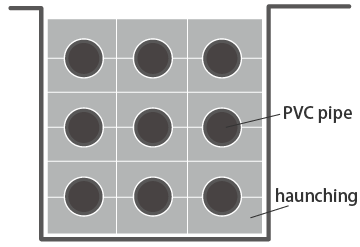 Conventional multiple pipe stacked conduit.
This type of conduit is assembled by using pipe pillow to
secure the round PVC pipes in place.

Various approaches for reducing costs have been investigated, but the most common approach today is the pipe conduit method, in which several pipes are buried underground and the cables laid by passing them through these pipes. 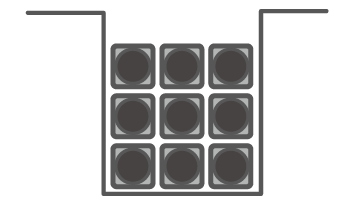 Satoshi Kozawa of the Furukawa Electric AT & Functional Plastics Division, Functional Plastics Products Department, states the following about the advantages of EFLEX Square Duct.
“Roads with high traffic volumes limit the distance over which pipes can be laid in a single night, so in general short five meter long pipes are used in these cases. These shorter pipes require more joints, so the workability and reliability of jointing EFLEX Square Duct become extremely important. For example, after cutting EFLEX Square Duct, the joint is made using an AQUA-Square supplied as an accessory of this system. In this case, jointing only requires about 30 seconds, or roughly one-tenth the time required when using rubber seal and screws. EFLEX Square Duct jointing also does not require any tools, so our customers are very pleased.”

Underground cable-protecting pipes are used to protect buried cables. As the first underground cable-protecting pipe developed in Japan, Furukawa Electric’s EFLEX is a round plastic corrugated pipe which has the strength to withstand underground burial while being light, easy to bend, and easy to work with. Over the 50 years since EFLEX was first sold in 1967, EFLEX has been used broadly from small-scale electrical work to large-scale public works projects.

50 years of EFLEX thanks to your support.