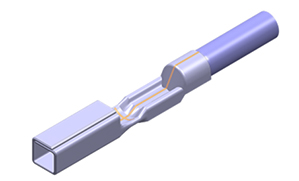 Automobile wire harnesses are components involving mainly the electric wires running all throughout automobiles. They play a major role in supplying power and transmitting signals throughout the vehicle, and thus serve similar functions as the nerves and veins running throughout the human body.

Using aluminum electric wires in these wire harnesses has been gaining significant attention due to recent efforts to make automobiles lighter, and due to the recent depletion and increasing costs of copper resources. Some have calculated that using aluminum wires in large SUVs could reduce the weight of wire harnesses anywhere from 30% to 40%, helping to improve the fuel efficiency of these vehicles.

However, if we are to use aluminum wire harnesses it is crucial to take measures against dissimilar metal corrosion that occurs in terminal areas, in order to obtain satisfactory electrical connections between aluminum wires and terminals made from copper alloys. Until now, factors such as the necessity of different processes during manufacturing (significantly increasing manufacturing costs) and dedicated parts that did not allow for general purpose use made it difficult for this to take place on a wide scale.

Resolving the problem of dissimilar metal corrosion with new technology

"α Terminal Series" is already used in the new 200 Series Land Cruiser released in August 2015, and Furukawa Electric intends to spread the use of aluminum wire harnesses by proposing their use among a wide variety of automobile manufacturers.

Tomoyuki Yamai, Executive Officer of the Engineering Department, Furukawa Automotive Systems Inc. (responsible for the core of the automobile business of the Furukawa Electric Group), had the following to say about the development of the new "α Terminal Series" corrosion proof terminal.
"'α Terminal Series' is a new product that was developed with the total effort of the Furukawa Electric Group. Since our founding, Furukawa Electric has remained deeply familiar with the handling characteristics of copper as a material used in terminals. The press technologies developed by Furukawa Automotive Systems over many years are used today for high precision terminal molding. We also use Furukawa Electric optical fiber lasers during the welding process in which the product is formed into a tube, resulting in exceptional airtightness and productivity. The entire Furukawa Electric Group will continue to expand its 'Automobile OneF' efforts to provide solutions to the automotive market, and help to make green-energy cars."